Koenraad Debackere, Chairman of the Board of Directors of KBC Group commented on today’s announcement as follows : "On behalf of the Board of Directors, I would like to sincerely thank John Hollows for his tireless commitment and significant contribution to our group in his different roles and at various entities abroad, and especially in the Czech Republic in more recent years. We’re truly grateful to John for his efforts in implementing the pillars of KBC’s strategy in our Czech Business Unit. Considerable progress has been made and results have been achieved in all areas of transformation, especially digital transformation and innovation. John also truly embraced and lived the KBC values.

I am delighted to welcome his successor Aleš. I’m convinced that his deep insights and far-reaching and extensive international experience in the financial sector and as CEO of KBC Bank Ireland at a crucial moment in its history, will help him to lead the Czech Business Unit through the challenging times of unprecedented change, innovation and digital transformation we are currently going through.”

Johan Thijs, KBC Group CEO explicitly thanked John Hollows : ‘Together with my colleagues at the Executive Committee I wish to express my deepest gratitude to John, who is retiring, for his longstanding career and outstanding performance. I am convinced that the Czech Republic Business Unit and its various stakeholders have benefited from John’s broad international experience, strong track record, strategic insights and exceptional leadership qualities. I have worked closely with John in the Executive Committee for several years now and appreciate him as a friend. My colleagues and I are extremely grateful to him for his years of dedication to our customers and staff in his various roles, and for his support, unconditional commitment and important contribution to our group’s development. We wish John all the very best in the future.”

Johan Thijs also congratulated Aleš on his appointment as CEO of KBC Group’s Czech Business Unit and welcomed him within the KBC Group Executive committee : “I’m also delighted that Aleš has agreed to take over from John as CEO of the Czech Business Unit. As customer experience, innovation and digital transformation have become top priorities, Aleš’ experience at KBC Bank Ireland and earlier as Head of Data and Strategy at ČSOB, will prove invaluable in his new role as CEO in Czech Republic and in taking the digital transformation of our operations in that country to the next level. Over the years, Aleš has consistently demonstrated he has the right combination of experience, leadership skills and deep understanding of our business to bring our Czech Business Unit to further growth and prosperity, to the benefit of all stakeholders.”

Aleš Blažek (born in 1972). After graduating with a Master’s Degree in Law at the Charles University Law School in Prague in 1997, Aleš started his professional career as an associate at the Prague Office of White & Case. From 2000 until 2007, he worked in Citigroup in Prague and London in numerous legal managerial positions in Corporate and Investment Banking. In 2007, he joined GE Capital and served as the General Counsel for GE Capital International with responsibility for legal services in all GE Capital businesses in Europe, the Middle East and Asia, and being a member of the senior executive team. He joined ČSOB in Prague in the Czech Republic Business Unit of KBC Group in 2014 as Head of the Legal Department, responsible for legal and regulatory services and corporate governance. In April 2019, he became Head of Data and Strategy at ČSOB. In this capacity he closely participated in the preparation and review of ČSOB Group’s strategy. Also he was responsible for management of ČSOB Group data infrastructure. In 2021 he was appointed CEO of KBC Bank Ireland.

He is married, with five children.

John Hollows (born in 1956) earned his degree in law and economics at Cambridge University. Between 1978 and 1991, he worked for the head office of Barclays Bank in London and subsequently as Country Manager for Barclays Bank in Taiwan from 1991 to 1995. He joined KBC Bank in 1996 as Country Manager of the Shanghai operations and in 1999 became General Manager for the Asia-Pacific region, where he was responsible for ten branches in six countries. He was appointed CEO of K&H Bank (Hungary) in 2003. In 2006 he became Senior General Manager of the Central and Eastern Europe banking division of KBC Group. He was appointed member of the KBC Group Executive Committee and CEO of the Central & Eastern Europe and Russia Business Unit in 2009. In 2010 he became KBC Group Chief Risk Officer. Since 2014 he has been CEO of the Business Unit Czech Republic of KBC Group.

John is married with 4 children. 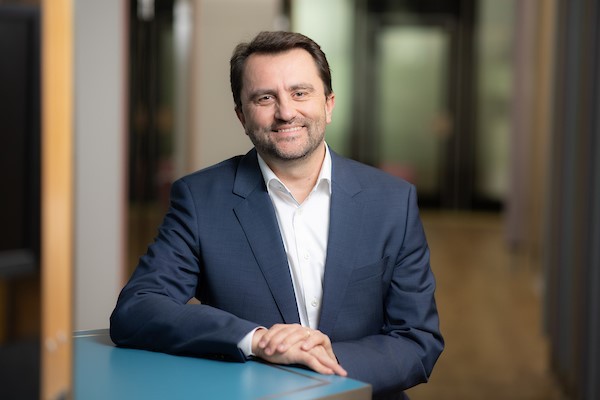