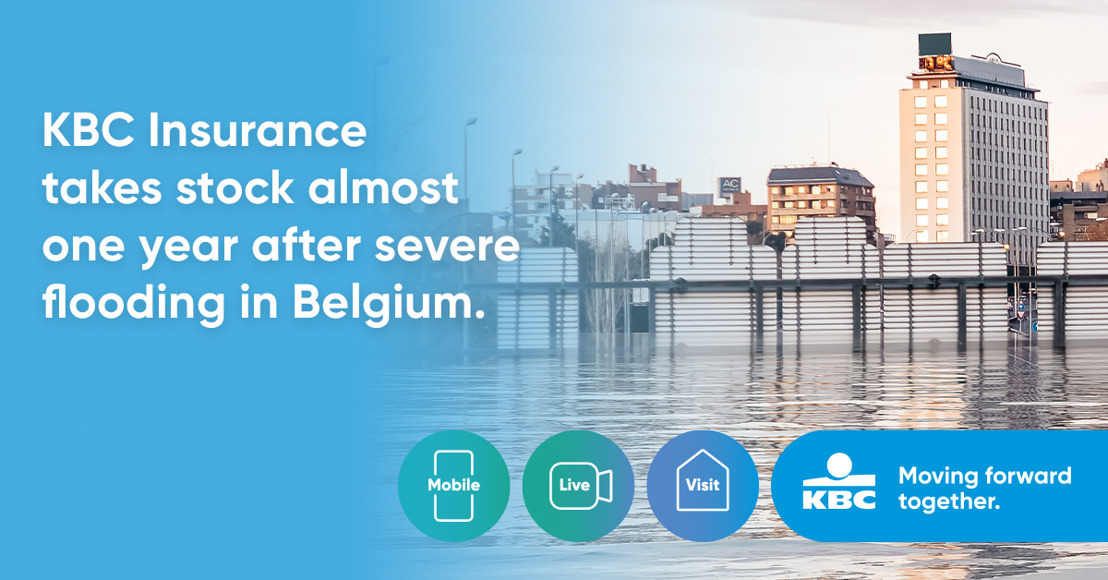 The flood disaster that hit large parts of Belgium a year ago caused not only a great deal of human suffering but also extensive material damage.

- ​ At the end of May 2022, KBC Insurance had already fully settled 88% of all claims and paid out a total of over 46 million in claims

This mainly concerned damage to homes, vehicles, businesses and agriculture.

David Moucheron, CEO KBC Belgium, summarizes the efforts and the role of KBC Insurance in the crisis situation as follows: "In the exceptional circumstances that we experienced last summer, we immediately ​ mobilised our broad network of insurance agents, experts and repairers, and used all their knowledge, experience and expertise to come to a quick and correct settlement of the claims for the families and businesses affected. In addition to those many hands, our digital channels (KBC Mobile, KBC Touch, video expertise capabilities) also helped to unburden customers and allowed them to file a claim digitally quickly, easily and efficiently. Around 25% of the claims were initiated digitally by the customers.

Our digital assistant Kate was also called in. Kate asked the customers shortly after the disaster if they had suffered any damage. With one push of the button, they could immediately file a claim digitally via KBC/CBC Mobile.

By combining our high-performance digital channels with the experience and expertise of our agent network, we were able to help our affected customers quickly and efficiently. This 'digital with a human touch' to unburden our customers is our greatest asset. This is also demonstrated by the high satisfaction scores awarded by customers to KBC Insurance. ​ ​

Meanwhile, we have continued to optimise that process. Today, customers who file a claim digitally for storm damage or broken glass are immediately given the option of choosing either an estimate and payment via the KBC Insurance agent, or have the repairs arranged by KBC. In that case, KBC Insurance immediately issues the repair order.

In the meantime, Kate has also invited our customers to file any claims caused by other natural disasters via KBC Mobile. We can now do this very precisely at the level of a municipality allowing our Kate messages to become increasingly more accurate and relevant. In this way, we can ensure that – in undoubtedly difficult circumstances for our customers – we are there for them more than ever."

The majority of damage (84%) involved homes and businesses. Other damage (car, special risks, agriculture, etc.) represented a rather small proportion of the claims in the disaster as a whole.

At present, there are still some 400 cases where the estimated damages have not been paid out in full because the damage is complex or the repairs are taking longer. For instance, certain payment tranches may be on hold, for example, if the reconstruction process is delayed because it is waiting for a contractor or repairer, or because of the longer delivery period of materials. Often KBC Insurance is also waiting for the receipt of the repair invoices in order to reimburse the VAT.

Digital processes provide support to customers as well as and KBC Insurance agents.

KBC Insurance is also strongly committed to innovation and digitalisation. Especially where this unburdens customers and enables them to be helped more quickly. For example, Kate, the personal digital assistant, was activated on 25 July 2021 after heavy rainfall in the province of Namur. Kate took proactive action and notified customers in the affected areas that – if necessary – they could initiate their claims file digitally via a simple ‘tap of a button’. 25% of the customers made use of this option. This avoided telephone queues at the 450 KBC Insurance agencies and allowed the agents to start the claims process immediately.

Digitality and human expertise go hand in hand here and reinforce each other, as demonstrated by the high satisfaction ratings awarded by customers to KBC Insurance. ​ ​