Based on the insights gained during the tendering process, the fact that the iconic building will be in an almost shell state after the remediation and the fact that the subsequent renovation will be a virtually new building project, KBC has decided to sell the building.

Following careful consideration of the redevelopment proposals and after a dialogue with the City of Antwerp, the Antwerp City Architect and the Flanders Heritage Agency, KBC has decided to sell the building to the Katoen Natie group. The professional real estate developer ION will act as project manager for the Katoen Natie group.

KBC hopes to be able to conclude a final sales agreement before the end of the year so that the works can start in the spring of 2021. KBC is also still awaiting Antwerp City’s approval regarding the transfer of the historical concessions associated with the building.

The Katoen Natie group wants to transform the tower into a tower of culture supplemented with a mix of retail, catering, offices and housing. With its spaces for temporary and long-term exhibitions, art depots, restoration workshop, sculpture garden, cinema, auditorium, panoramic rooms, bookshop, and more, the tower will have a place among Antwerp's other major heritage and cultural institutions. The 'tower of culture' also broadens the city of the Scheldt's appeal as true cultural city.

Prior to this redevelopment, ION will have a thorough and high-quality remediation carried out by the consortium of specialist firms, the Tijdelijke Maatschap Asbest Partners België BV (APB), Libreco NV, Monument Renovatie Technieken NV (MRT) and Monument Vandekerckhove NV from Ingelmunster, which was appointed by KBC itself to carry out the demolition, asbestos remediation and stability works on the KBC Tower.

With a view to this remediation, KBC obtained an integrated environmental permit from the city of Antwerp and will carry out the quality control of the asbestos remediation works to ensure that the highest standards are met under all circumstances.

These works, which will start in the spring of 2021, will last 36 months and subsequently ION will be responsible for the further redevelopment.

The partners of the Tijdelijke Maatschap (TM) have already carried out the following projects in Brussels in the past: the restoration of the Museum of Fine Arts (KMSKB), the renovation of the National Bank (NBN), the Royal Library (KBR) and the asbestos remediation works on the Leopold II tunnel.

They also formed a collaboration in the restoration and renovation of the Antwerp Town Hall.

Among their other references are the asbestos remediation works on former warships of the French Navy in Ghent, the restoration, renovation and new construction of the CERA head office in Leuven, the redevelopment and restoration of the Predikherenklooster in Mechelen, the asbestos remediation works on the Antwerp University Hospital (UZA) and the Ghent University Hospital, etc.

The TM regards the KBC Tower as 'an exceptional mission in which heritage, people and the environment are given the leading roles and challenge each other'.

Johan Thijs, CEO of KBC Group, explains the decision: 'I would like to start by expressing my sincere thanks to the Antwerp city council, the municipal departments of the city of Antwerp, in particular the City Architect, his staff and the department responsible for the preservation of monuments and historic buildings. I would also like to thank the Flanders Heritage Agency for its excellent cooperation. Throughout the whole process, we have been able to count on their constructiveness and their willingness to contribute with an open mind to the redevelopment of the iconic building in an important district of Antwerp.

It isn't surprising that we have opted for the combination Katoen Natie group – ION that wants to transform the KBC Tower into a tower of culture in the future. KBC has been committed to art and heritage for many years, including the well-known Snyders & Rockox House in Antwerp.  We firmly believe that the wonderful cultural-historical and forward-looking solution we have chosen for the KBC Tower not only underlines our love of culture but is a win-win situation for all parties – KBC, the Katoen Natie group, ION, the inhabitants of Antwerp and, by extension, the entire community'.

Wim Eraly, Senior General Manager of Corporate Banking & Facilities at KBC, adds: 'The full remediation and thorough renovation of the iconic KBC Tower in Antwerp is an important project for us. So we're delighted to have been able to enter into a partnership with the Katoen Natie group and a professional real estate developer such as ION. ION will deal with the redevelopment of the KBC Tower, as opposed to us remaining the owner of the building ourselves, remediating it and carrying out the subsequent renovations. In making the selection, we also paid particular attention to the sustainability of the design and the destination.

The KBC Tower has been owned by KBC since 1930. So, we took our time in deciding to sell it. Nevertheless, KBC will stay connected with the tower in the future as the KBC logo will remain visible on top of it. We will also continue to welcome our customers in a KBC Bank branch on the ground floor. That way, a small part of the tower will remain ours.'

Fernand Huts, chairman and CEO of the Katoen Natie group, explains why this project is so close to his heart: 'Born in Antwerp, having grown up in the Seefhoek and been educated in the Sint-Jan Berchmanscollege on the Meir, I have a great connection with Antwerp and its icons. As a native of Seefhoek, it gives me an intense satisfaction to develop a company –  Katoen Natie –  that can give the KBC Tower ('Boerentoren') new vitality with a cultural foundation.  The project is a huge challenge. But it is precisely this challenge that is driving me to use all my experience and talent, as well as that of my family and company, to write history with the KBC Tower.  It will be given a place among the city's other major heritage and cultural institutions. The 'tower of culture' broadens the city on the Scheldt 's appeal as true cultural city. The KBC Tower will be a gift to the people of Antwerp, the Flemings, the international visitors. It will be their tower, and we aim to open up as much of the tower as possible to the public.  So that they can visit numerous exhibition spaces with temporary and long-term exhibitions, the art depots, the restoration workshop, the cinema and panoramic rooms, the sculpture garden, the various catering establishments, the auditorium and conference rooms, the bookshop and other shops, the markets and the courtyards. As a result of its accessibility and new features, it will become a real and fundamental part of urban society and a tower we can all be proud of.'

In the appendix to this press release, Mr Fernand Huts explains in more detail why he considers it so important to develop the KBC Tower into a tower of culture.

Davy Demuynck, CEO of ION is very pleased that ION has been allowed to redevelop the iconic tower on behalf of and in cooperation with the Katoen Natie group: 'From the off, we knew that it would not be easy to win the tendering procedure. The scale of this project and our desire to have a single hold on this iconic building made us decide pretty quickly to go in search of a partner. Preferably a local partner who could ensure Flemish roots. I immediately thought of Fernand Huts and the Katoen Natie group, where I started my career. We quickly came to an agreement about our partnership. ION acts as project developer in this project and will tailor the large-scale project from A to Z for the Katoen Natie group that acts as long-term investor. ION is a Flemish project developer with offices in Waregem, Brussels and Antwerp. With a team of 100 employees, we develop projects with a total market value of 2 billion euros throughout Belgium. The KBC Tower will of course be our biggest challenge and confirms our ambition to also become a major project developer in Antwerp. Being allowed to realise this project makes us and our employees extremely proud.'

What will the tower look like in the future?

Culture will be the beating heart of the tower, together with future-oriented retail on the ground floor and first floor (along the Schoenmarkt, Meirbrug and Eiermarkt). Visitors will be able to stroll the building.  There will also be a mix of food & leisure as source of experience, while in the narrow part of the tower (from the 11th to the 23rd floor), there will be flats like the old times. To top it all off, there will also be an observatory and panoramic room spread over the top three floors (24th, 25th and 26th). They are an integral part of the cultural operation and will be open to the public so that everyone can fully enjoy the exceptional 360° view.

The KBC logo will remain visible on the tower and on the ground floor KBC will continue to welcome its customers in a KBC Bank branch.

At the end of 2019 (press release of 4 December 2019), KBC wrote out a request for proposal for a complete remediation of the building by a specialist asbestos remediation company.  In addition, KBC considered the option of a possible partnership and explored the possibility of a real estate developer taking on the redevelopment of the KBC Tower, instead of KBC retaining ownership of the building, doing the remediation work itself and then subsequently renovating it.

Various specialised firms responded to KBC's public tender for a full remediation of the KBC Tower. KBC also received a response from several professional real estate developers for the redevelopment and/or sale of this iconic building.

The KBC employees who had been working in the KBC Tower until the summer of 2018 and who are still spread over various temporary workplaces today, will all – as announced in August – be centralised in the Kievit IIb building near Antwerp Central train station as from the beginning of 2021.

Some historical figures about the KBC Tower, the first skyscraper in Western Europe: 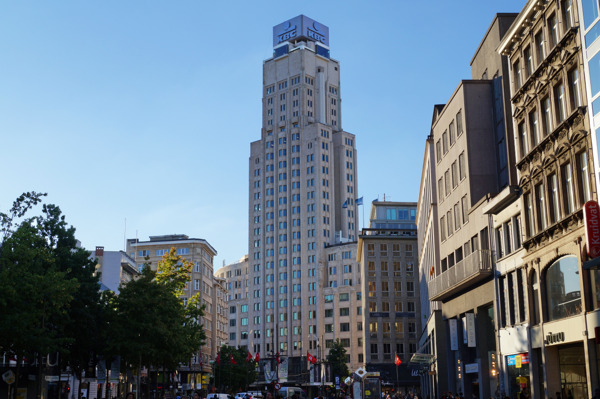