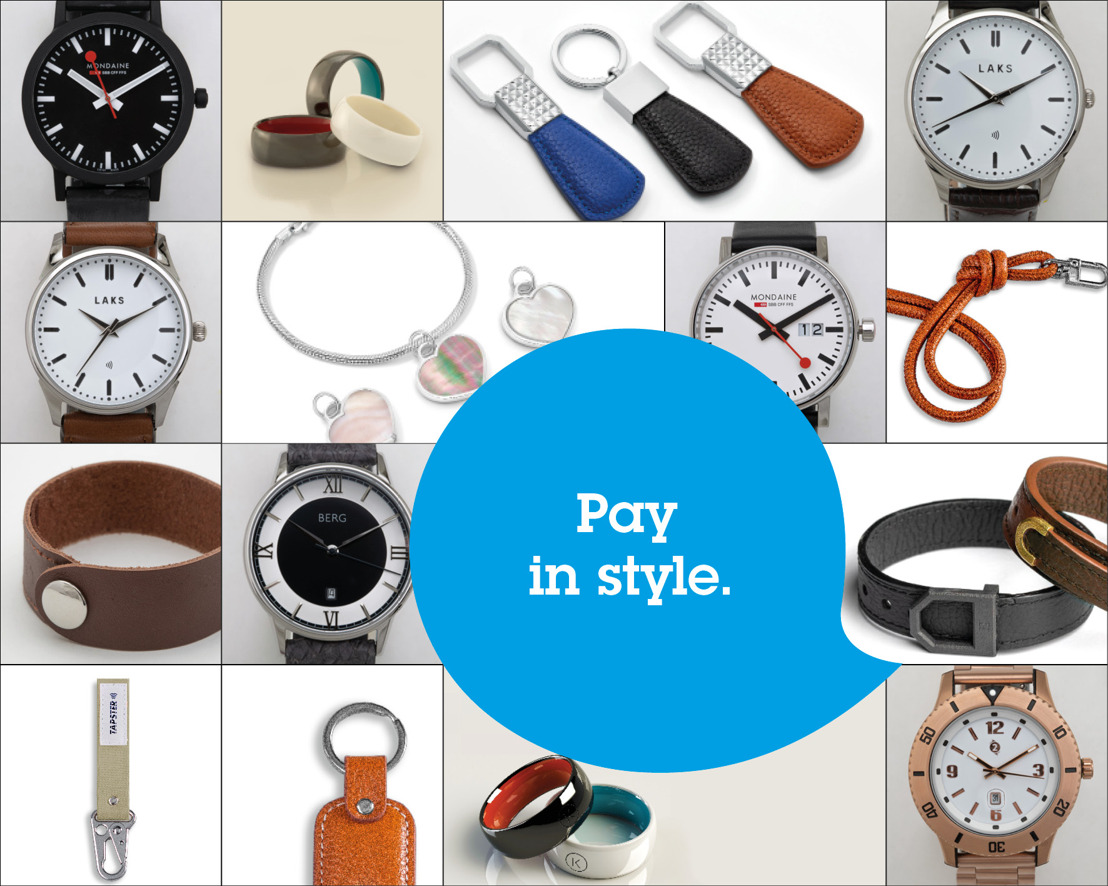 As of today, all KBC customers[1] can also make contactless payments with a wearable, such as a watch, a ring, a keyring or bracelet. They are able to pay now with a wearable, everywhere they can already pay contactless with their KBC Debit Card. A new element compared to the pilot is that Bancontact payments are now also possible with a wearable as well as Maestro payments.

Towards the end of 2018, KBC called for customers to take part in a year-long pilot project to test this innovative way of paying. Over 10 000 KBC customers expressed an interest, of whom 1 000 eventually spent a year using a wearable – a fashionable accessory such as a ring, bracelet, watch or keyring – fitted with the same technology as a contactless payment card. That wearable was linked to their KBC Debit Card. (press release of 30 November 2018)

The 1 000 pilot users provided regular feedback in the course of the year. Their response was so positive that KBC decided to open up payments by wearable to all KBC customers as of the second half of 2020. Over 90% of payment terminals in Belgium have been fitted with the necessary technology for contactless payment.

Anyone who doesn’t have a wearable can buy one. Customers can choose from a number of suppliers in Belgium and abroad via http://www.kbc.be/en/wearables(you can also find a list at the end of this press release). Having made their choice, customers can then buy the wearable and set it up via the supplier’s website. The wearable will be delivered to their preferred address. It is not activated on delivery: only the customer can do that, by following a simple procedure within the secure KBC Mobile environment. This ensures that the entire purchase and activation process can be completed safely. Once the wearable has been activated, the customer can use it to make payments.

Karin Van Hoecke, General Manager for Digital Transformation, KBC Belgium, explains the decision: ‘We were very pleasantly surprised by the number of enthusiastic volunteers who came forward at the beginning of the pilot to test payment with a watch, ring, keyring or bracelet. We regularly questioned the 1 000 customers who took part in the pilot about their experiences, so that we could make minor adjustments. What we learned from this was that the wearable you use to make payments needs to match your personal style. That led us to broaden the offering, so that there are wearables for everyone’s style and budget.  The volunteers were very satisfied from the outset with the ease of use. A final survey showed they were enthusiastic about continuing to use this way of payment. That’s what prompted KBC to open up the service to all our customers. They too can now enjoy an innovative addition to the various payment options we already offer. I’d like to take this opportunity to sincerely thank all the participants for their enthusiastic contribution and their valuable feedback.’

Ivo De Meersman, General Manager for Payments & Cards, KBC Belgium, adds: ‘We’re proud to be the first bank in Belgium able to offer this new payment method to our customers. It was a challenging project that could only succeed thanks to the great cooperation with BPC (BancontactPayconiqCompany), Digiseq, equensWorldline, Fidesmo, Mastercard and Thales. Everybody concerned worked hard to maximise the ease of use that was already clear during the pilot. A new element compared to the pilot is that Bancontact payments are now also possible with a wearable as well as Maestro payments. Once a customer has linked the wearable to their debit card, they can leave the card at home and pay everywhere using a wearable that matches their personality. A lot of hard work has gone into perfecting this technically, but it was equally important for our customers to be able to choose straight away from a varied range of wearables to match everyone’s tastes and budget. We also identified several attractive partners in this growing market to enable us to offer a comprehensive selection.

Some interesting findings from the pilot project

For the purchase of wearables, KBC is working with:

[1] ‘KBC’ also refers here to CBC and to KBC Brussels