Karin Van Hoecke, KBC's General Manager of Digital Transformation ‘The launch of Fitbit Pay in Belgium is an ideal solution for KBC customers who lead an active life. We recently provided the possibility to pay with Garmin Pay and the feedback we've received has been very positive. A more general wearables payments trial where customers can pay with their watch, ring, bracelet or key holder, is now running and again the reactions are promising. By including Fitbit Pay in our range of payment solutions, we hope to satisfy even more active customers.  It allows a seamless connection between sport and payments, with no need to carry cash or your bank card.'

Contactless slowly but surely becoming an established means of payment

Fitbit Pay is supported in more than 20 countries by more than 160 banks and payment institutions, including the Mastercard and Visa networks. In Belgium, Fitbit Pay is available to KBC, CBC and KBC Brussels customers.

How to install and use Fitbit Pay

To use Fitbit Pay, the customer first has to add his KBC (Brussels)/CBC debit card to his Fitbit Pay Wallet on his Fitbit Charge 3 Special Edition, Versa or Ionic device by following simple steps in the Fitbit mobile app.

Making payments in shops that accept contactless payments is really easy. Users press and hold the left-side button until the digital payment card is seen on the device screen, then – when prompted – enter their four-digit PIN code and hold the watch near the payment terminal until a confirmation of payment appears.

Fitbit Pay transactions use tokenisation, a type of payment security technology that replaces card holders' account details with a unique digital ID (a ‘token’), ensuring that the user's card information is never shared with merchants or with Fitbit. For added security, users have to choose a PIN during device set-up. 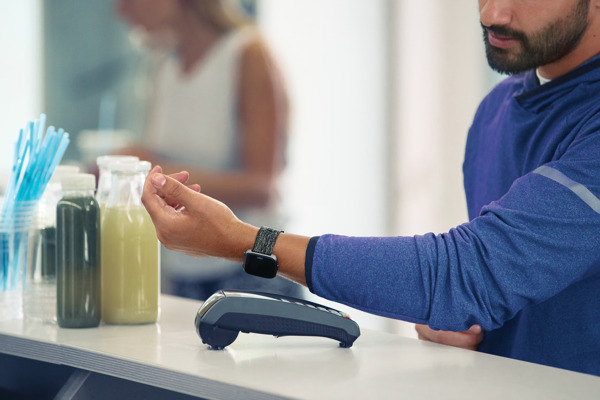