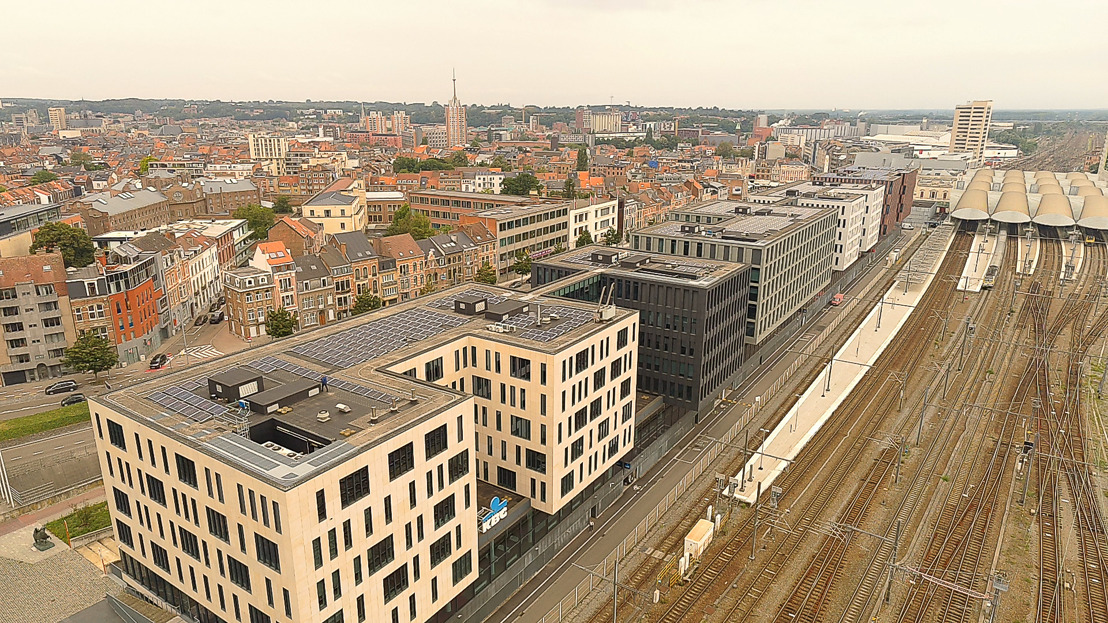 The 527 solar panels are evenly distributed over 4 KBC buildings near the Leuven railway station and have a capacity of 176 kWp. Together they will generate 170,560 kWh of green energy each year, corresponding to the annual energy consumption of approximately 50 households. Insaver, a subsidiary of Luminus specialised in solar panels and insulation, was responsible for the design, the installation and the commissioning of the photovoltaic installation.

Jan Pollaris, CEO of Insaver: “KBC will reduce its CO2 emissions by 39 tonnes on an annual basis thanks to the solar (panel) installation.  We are proud to have helped them achieve their ambitions as to environmental responsibility and sustainability."

The installation is in line with KBC's sustainability policy

At KBC, sustainability is an integral part of the corporate strategy. It’s a way for KBC to make a difference for the economy and for society. The company has managed to reduce the direct greenhouse emissions generated by its own activities by 50% since 2015.  In 2019 KBC Group increased the percentage of renewable energy to 83%.

Geert Cromphout , KBC General Manager Facilities adds:  “This project shows that KBC Group continues to make every possible effort to reduce its own environmental footprint. This is perfectly in line with our ambition to further reduce our greenhouse emissions by 65% in the period 2015-2030 and by 80% in the period 2015-2040 (measurements include commuting as from this year). We are also committed to the long-term target of reaching net zero emissions by 2050.  This project thus fits 100% into our commitment to achieve the goal of 90% renewable energy in all core countries by 2030.

In addition, KBC Group signed the Collective Commitment to Climate Action last year, an initiative of the United Nations Environmental Program Finance Initiative (UNEP FI).  This is a clear commitment to also bring our indirect impact on the climate in line with the Paris Climate Agreement through the granting of credits to and investments in activities and projects of our clients. KBC will also publish clear quantitative targets in this respect three years after the signing.”

Luminus is committed to helping its customers reduce their CO2 emissions

As part of the fight against global warming, all initiatives aimed at the production and consumption of local and green energy should be encouraged.

“At Luminus, we work each day for the preservation of our planet," says Grégoire Dallemagne, CEO of Luminus.  "This installation is perfectly in line with our strategy to help our customers reduce their carbon footprint, in this case by producing their own green electricity thanks to solar panels. We are proud to support KBC Belgium in its energy transition. Only together will we succeed in building a CO2-neutral future.”

Insaver was created in 2012 out of a genuine ambition to improve the energy efficiency of buildings.  The company is dedicated to reducing the ecological footprint of households and enterprises in Flanders and Brussels.  It is specialised in solar panels, insulation, roof works and battery systems.   Insaver joined the Luminus Group in 2017.  In 2019 the company realised 10,000 installations, for a total of 44,000 solar panels. Insaver employs more than 30 people and is established at the Europark business park in Houthalen.

KBC is one of Europe’s most important financial institutions. It is a multi-channel bank insurance group with a geographic focus on Europe, mainly serving private individuals, SMEs and medium-sized enterprises. The group occupies an important position, in many cases as the market leader, in its core markets of Belgium, the Czech Republic, Bulgaria, Hungary, Slovakia and Ireland. The KBC Group is also present in a number of other countries and regions worldwide on a more selective basis.

KBC employs approximately 42,000 people and has more than 11 million clients in its core markets.