Johan Thijs, CEO of KBC Group, is proud of 'his' Team Blue's performance: 'Within KBC, we place a strong emphasis on cooperation, including across borders. The cohesion between the various entities of our group is not only achieved via our PEARL values, but also via our logo and colour. And because that colour is blue, we call ourselves 'Team Blue'.

We encourage exchanges of knowledge, best practices, experience, products and services among all the different divisions, countries and business functions. We urge our people to collaborate intensively and develop shared creative solutions aimed at providing our customers with faster, improved service.

In order to experience this group-wide co-creation and our collective commitment ever more intensively, we have been proposing creative challenges to our more than 42 000 Team Blue members. The first three challenges strengthened the internal group dynamics. The fourth challenge bridges the gap between Team Blue and society. By covering the distance 'to the moon and back' via sports, our employees were able to donate 500 000 euros to charities in Belgium, Hungary, the Czech Republic, Slovakia, Bulgaria and Ireland. In doing so, Team Blue is actively contributing to a better society. In Belgium, the proceeds will go to Studio Brussel's 'De Warmste Week', as well as to several initiatives proposed by KBC employees.’

The distance from Earth to the moon is 384 000 kilometres. More than 42 000 Team Blue members were challenged to cover at least that distance via all kinds of sports activities. With each kilometre covered, they collected money for charity. After a few weeks, it became clear that the goal would effectively be achieved, so KBC doubled its ambition by extending the distance to 'there and back'. Team Blue accepted the challenge without blinking an eye.

From 1 September to 25 October 2018, KBC employees were encouraged to take part in group-wide or self-organised sports activities together with colleagues, family, friends and customers. Everyone could participate, either as an athlete or by providing financial support. A total of 500 000 euros was collected. KBC Belgium's contribution will be apportioned by the King Baudouin Foundation between Studio Brussel's 'De Warmste Week' and a group of charities selected after consultation with the employees.

The other core countries of KBC Group selected local charities that were closest to their own community work. Ireland opted to commit to the Alzheimer Foundation. Slovakia and Hungary raised money for their own existing foundations which in turn transfer funds to various charities. In the Czech Republic, about thirty charities were chosen. Bulgaria selected five charities, including the Because Foundation. KBC employees donated funds to a total of 557 charities across the group, all under the 'Aim for the moon - and back' banner.

With every Team Blue challenge, the bar is raised a bit higher

The next challenge entailed staff decking out their workplace or office in the Team's blue colour scheme during the 2017 Christmas period. Throughout the KBC group, KBC employees ensured that 650 bank branches and insurance agencies and dozens of areas at the head offices would be suffused in a bright blue glow.

For the third challenge, KBC organised the world's largest online quiz on 31 May 2018. With 1 129 simultaneous participants in six countries, the world record for participating in an online quiz was broken under the watchful eye of Guinness World Records. 7 695 employees applied as candidates to take part in the quiz.

The fourth challenge, Aim for the moon (and back), enabled Team Blue to exercise together to cover 770 867 kilometres, so that 500 000 euros could be donated to various charities.

In a few months, Team Blue can expect to face another new challenge, which will involve everyone's creativity and imagination. It is already clear that this will not be easy. But that's what makes the challenge all the more attractive. 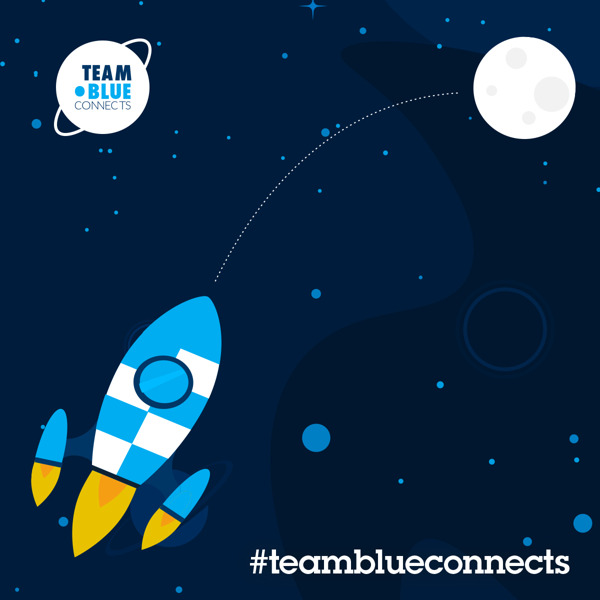