KBC sold the building after extensive market consultation, in the course of which several dozen parties expressed an interest, with many also proceeding to make an offer for both the remediation and redevelopment of the Tower. Six parties were eventually invited to present their projects to KBC and the City of Antwerp’s Planning Department. The remediation process is scheduled for completion in 2024, following which work will begin on preparing the monumental old building for its new function. KBC is delighted that, under this new project, the Tower will remain an integral part of the familiar Antwerp skyline while simultaneously taking on a new, contemporary and wider role.

The Katoen Natie Group will transform the building into a tower of culture, which will also offer place for retail units, offices, hospitality and family homes. In this way, the ‘Boerentoren’ will link back to its original, semi-public function in the 1930s, while at the same time gaining a place among Antwerp’s other major heritage and cultural institutions. Having cherished the Tower for almost a century, KBC will retain a close connection with the building. It is involved in the remediation work, for instance, and the KBC logo will continue to top the building as a familiar landmark.

Johan Thijs, KBC Group CEO: ‘I want to sincerely thank the Katoen Natie Group for the outstanding cooperation that has culminated in this valuable and ambitious project. Art and cultural heritage have been close to KBC’s heart for many years and so we felt an immediate connection with the Katoen Natie Group’s proposal to turn the iconic Boerentoren into a tower of culture with a wide-ranging community function. The project is the perfect way to secure the future of this historic building. The employees who used to work here – over a thousand of them at times – have been relocated elsewhere in the city, to buildings that meet the requirements of a professional office environment. We look back with pride at the long period in which the Boerentoren was “our place”, while feeling confident about passing it on to the Katoen Natie Group. It is now in 100% Antwerp hands and, under its new owners, will be able to live up fully to its role as an icon of the city.’

History of the building

The Tower was built on the initiative of the Algemeene Bankvereeniging – one of the historical predecessors of today’s KBC – which was looking for prestigious new headquarters. The City of Antwerp, meanwhile, had been keen for some time to provide a ‘dignified closure’ for the Meir, which had been badly damaged in 1914 at the beginning of the First World War. The Municipal Council sold the entire plot to the Algemeene Bankvereeniging in 1928.

Continental Europe’s first skyscraper was realised under the leadership of a team of three architects. Construction of the 87.5-metre-high tower began in 1929 and was completed in 1931. The building incorporated office and teller space for the Algemeene Bankvereeniging, but also apartments, shops on the ground floor and a tearoom.

The panoramic gallery on the top floor was open to the public until 1969.

The 1970s saw the addition of a new wing, a relay station was installed for Flemish television and the tower was fully converted into an office building complete with auditorium. It has been a listed monument since 1981.

KBC carried out a fundamental restoration of the facade in 2014. Over the years, the gradual penetration of moisture led to corrosion in the tower’s underlying steel structure. This was halted using active cathodic protection – a technique that deals sustainably and long-term with both existing and future corrosion, while guaranteeing the stable physical structure of the steel skeleton. The cladding of the facade was also thoroughly restored.

KBC decided in 2018 that the building required thorough renovation and complete remediation, following the discovery – during ongoing renovation works – of concealed asbestos in several specific locations, which had not previously been visible or accessible, despite extensive asbestos treatment in the early 1990s.

In 2019, KBC issued tenders for the complete remediation of the building and its possible redevelopment. This process was successfully completed on 19 November 2020, following which KBC decided to sell the building to the Katoen Natie Group, with the professional real-estate developer ION acting as the new owner’s project manager. The sale was finalised on 11 July 2021.

Some technical facts about the KBC Tower 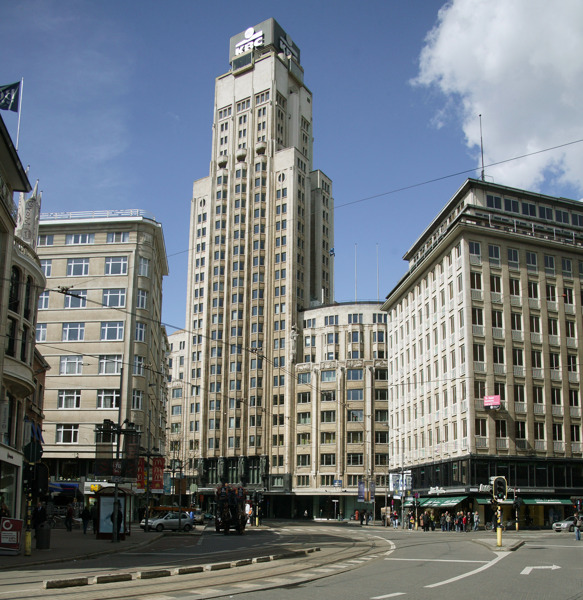